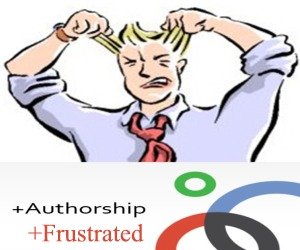 How do you feel about the end of Google Authorship?

Like with many of their projects, Google always seemed to treat Google Authorship as “beta”. This way, it’s easy for them to hastily end a project and say, “Well, it was only in beta and we decided to scrape it.” Heck, Gmail was in beta for five years. Others wonder why half of Google is always in beta.

I’m a big fan of many Google offerings. In fact, with my Google phone, maps, contacts, email, etc., I’m pretty much tied into the whole Google ecosystem. But I don’t often like how they make decisions without consulting customers or offering alternatives.

And, in my view, this is what they did with Google Authorship.

In June 2011, Google’s mantra was essentially this: “Everyone must embrace Google Authorship to establish author credibility and remain a atop the search rankings. “ Here is the first Google Authorship announcement from the “Official WebMaster Blog”.

With that, content creators and developers around the world devoted significant resources to establishing Google Authorship for their content. Can you fathom the man-hours devoted to this effort?

Then, in August 2014, simply this: “Authorship markup is no longer supported in web search.”

Software companies are the only businesses that seem to get away with this type of behavior. Imagine if you bought a new car in “beta” form and then, when things didn’t go exactly right, the car-maker says, “Oh, sorry, we don’t support that anymore.”