This article is part of our Social Engine Optimization series, a series that tells you how to incorporate social media in your SEO efforts.

The popularity of Twitter is enormous. Twitter has, quite literally, been used to report, organize and lead revolutions in various countries. Apparently, people love expressing themselves in 140 characters or less. Your business needs a Twitter account and below we will give you some ideas and links to create, enhance, and explain how to use Twitter for maximum results. 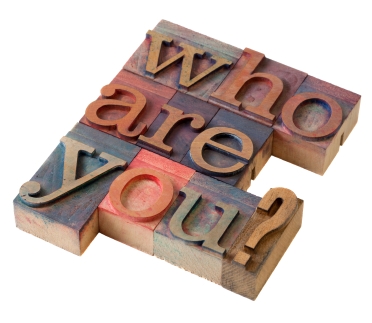 The Who once wrote a song called “Who Are You” which ignited a generation of young people and launched the band to super-stardom. They certainly had no idea that the song would one play a role in social media, but it certainly does.

In a great article entitled Which Type of Twitter Account Should You Create?, Lisa Barone discusses all of the options. With one exception, I tend to favor separating your corporate and personal accounts as I wrote in the article Managing Social Media Accounts. The exception is this: If the owner and product are inseparable (e.g. Howard Stern), use one Twitter account. If not, maintain separate identities.

You can be up and running with Twitter quickly. Before you start, be sure to have a “profile” pic at the ready. If you are posting as yourself, this photo will probably be of you and, for your company, the company logo should suffice. Your Twitter profile picture should be square!

After you have your Twitter account setup, you should be sure to customize your profile, providing a solid SEO keyword description and a unique look and feel. (Note: Creating customized Twitter backgrounds can take awhile and may require a professional. When you are getting started, you may want to use one of the pre-existing templates to make your page look unique instead of customizing lots of graphics.)

Here are a couple of Twitter business tip links to facilitate your customizations:

How to Customize Your Twitter Design: This is the official Twitter page and contains the basic information about customizing your page.

How to Create Custom Twitter Backgrounds and Choose Your Twitter Profile Picture: This article discusses the design of your Twitter background with dimension detail and examples.

Update: September 17th, 2012
Twitter has just launched a new “header image” feature which allows you to do further modifications and customizations to your Twitter page. You do not need to modify this but it is yet another option now to customize your page. Here is an Twitter how to tip that addresses the recent update:

10 Twitter Header Images Done Right: As always, Mashable was on top of this issue right away. They give great examples of people and companies who have already implemented this feature. 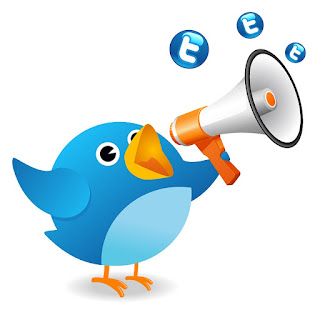 When we speak of Twitter and SEO, we are redefining SEO to mean Social Engine Optimization. While the traditional goal of SEO is to move your site up in the natural search engine results–which social media does, our goal is also to generate lots of traffic from the specific social media site. In this case, Twitter!

The most important concept to understand with any social media outlet is the social aspect of it. Too many people create their social media accounts and then talk only about their product without getting involved in anything else. This is called push marketing and it does not work with social media. You must get involved!

Twitter involvement is all about following and being followed. Generally, unless you are a mega-brand, you must follow others to develop a following.

The best place to get started with this is Twitter’s own How should I get started using Twitter? page. In the “how to start tweeting section”, you can found out the secrets to build an audience through retweets and replies.

If you’re a new user, others are more likely to find your messages if they are Retweets or @replies.

Finally, one more “basic” Twitter business tip that you need to understand is a “hashtag”. A hashtag is simply a categorization of a tweet. For example, if you tweet “I love my new Samsung Galaxy Note”, nobody will see it. However, if you Tweet “#Galaxy #Samsung I love my new Samsung Galaxy Note”, it will appear as a Tweet for everyone to see who is interested in these categories. Take a look at the example below:

The basics of Twitter optimization will get you far. Why? Most individuals and businesses begin Twitter with a flare and quickly fade away because social media involvement takes time.

After you have mastered the basics, you may want to extend your Twitter involvement with more creative participation. For example, you can offer incentives to your Twitter followers with discount coupons and Twitter only specials. Techniques such as these, and the many more mentioned below, work best after you have built a Twitter following.

The best place to begin with advanced Twitter SEO ideas is the Twitter Small Business Guide. This guide contains many examples and best practices you may wish to implement. Following that, view these case studies of people who have achieved a high-level of Twitter success.

When you go beyond the basics of Twitter optimization, you may enjoy the following updated tips and strategies to maximize your Twitter returns.

16 Creative Ways to Use Twitter for Business: Written by Charlene Kingston, this is one of the best posts on Twitter for Business, with suggestions on how to organize who you follow, create a conversation list, change your visual branding and much more.

17 Examples of Twitter Brand Page Backgrounds to Inspire You: Want to create a great first impression with your Twitter page? Then make it look great! This post presents 17 companies that you lead you by their example.

5 Ways Your Business Should Use Twitter Hashtags: We talked about Hashtags above as a means to categorize your posts so that people interested in that category will view your Tweet. This post goes one step further and delves into different ways to use hashtags.

After spending time on social media, and in this case Twitter, you will want to measure success in some way. Is all of this time getting you anywhere? Are you gathering customers and increasing your online presence?

Measuring Success on Twitter: This is an in depth article on the different ways to measure your Twitter success.

You have certainly heard the expression “He who fails to plan, plans to fail”.

Success in the social media sector requires a solid plan, reminders each day about what you need to do to succeed with Twitter and other social media.

The SEO System delivers such a plan everyday. Each day when you login to The SEO System, you are given your social media tasks on the front page as seen in the photo below: 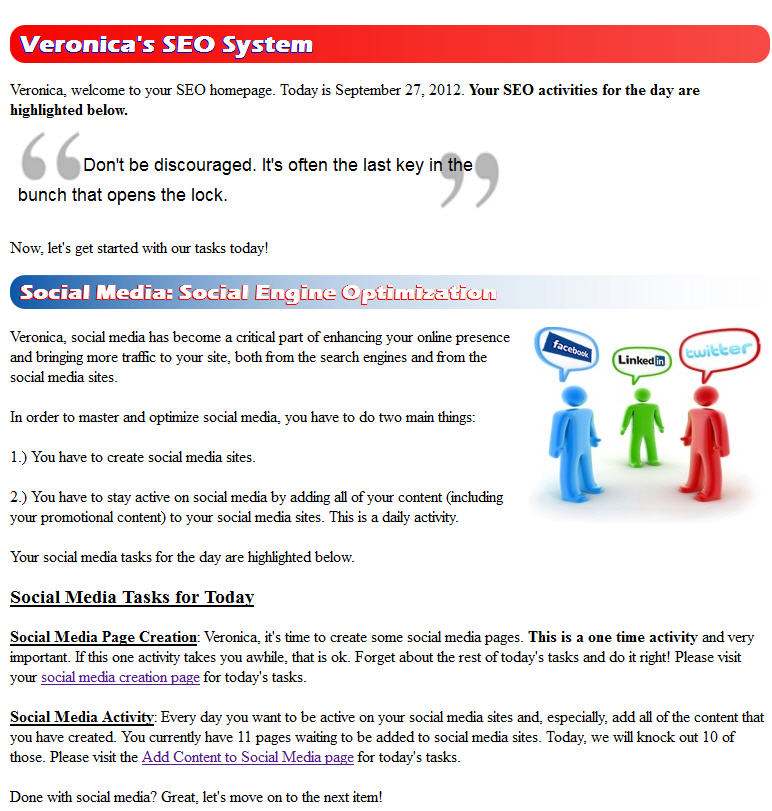 Would you like to have an automated SEO and social media plan everyday? Well, then, it’s time to get started >>> Take the COMPLETELY FREE 30 day trial of The SEO System now!