IT consulting firm Booz Allen Hamilton, with government contracts worth billions of dollars, is not minding their social media outlets very well in the wake of the “Edward Snowden” issue. Take a look at the Facebook photo below: 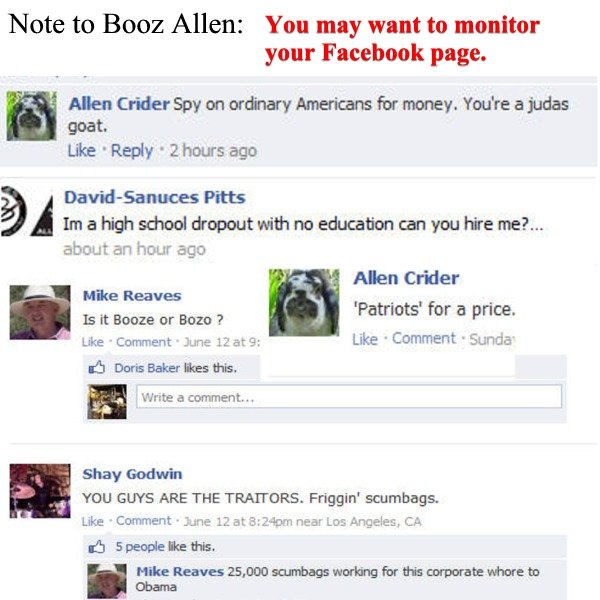 There are many ways to respond to social media opinions and, in the wake of negative headlines, companies need to be on the ball 24/7.

This recent case of Booz Allen Hamilton (BAH) should be a lesson for all firms.

BAH is a company that earns billions in IT and management consulting fees primarily from government contracts. Outside the business realm, many people may not have even known of BAH, who probably would have preferred to keep their billion dollar anonymity.

Certainly, it is difficult to control these external stories and even a powerhouse like BAH can’t influence everybody. However, one area they can control is their social media pages.

As we look at the above photo from the BAH Facebook page, we can see that BAH is not minding their own social media storefront. People are calling them “traitors”, “scumbags”, “bozos”…all on a page that BAH has the ability to control.

The lesson here is this: When your company is making 24/7 headlines, you need to monitor your social media sites 24/7.

As one of the world’s largest IT consulting firms, I would think BAH would know this. Wouldn’t you?