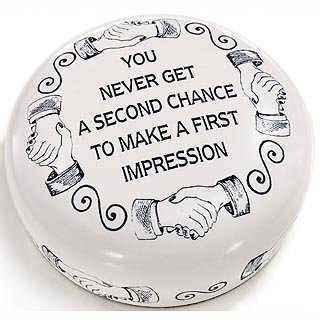 Have you ever considered doing business with a company only to look at their social media profiles and deciding to go with another company?

I certainly have and perhaps you too.

Many executives don’t understand the value of social media marketing.  They want hard data to determine the exact ROI that social media can provide their company.  But, in this scenario, where is the hard data?  A person considered doing business with your company until they socially investigated you.  And guess what?  Your company left the wrong impression.

In the world of web, SEO, and social media marketing, we think of the term impression as someone who has visited one of your web properties—they have made an impression and are now registered as hard-data in the form of increased visitor count.  This is what executives want to see—the hard data.

But these same executives need to consider the more natural form of the word impression.  As in, what impression does your company give to the public?

The bottom line is this:  A company that has no social media presence or has an outdated, infrequently updated social media profile leaves a lousy impression.

At The SEO System, we provide SEO, social media, and web design software and services.  Last year, we received a call from a client who wanted us to re-design their Twitter, Facebook, and LinkedIn social media profiles.  The existing profiles were, well, lame and the last updates were more than a year old.

I responded to the client, “Well, yes, we could certainly do that but what is the post re-design plan?  What will be your strategy for attracting and interacting with social media followers?”

“Well,” I told the client, “if you have no promotion plan, your social media profiles will receive little to no traffic even if they look great.”

“For now, let’s just do the redesign and we’ll talk about promotion later.”

About two months later, the client called me after receiving an anonymous email that said:  “Your Facebook page looks great but you have only 15 followers.  I can’t do business with a company that only has 15 followers.”

Sometimes lessons are learned the hard way.  The client only realized that he was making a bad social media impression after he received the anonymous email.  But, the question lingers:  How many other customers did he lose?  Obviously, most potential customers will not send that email.

After working with this particular client on brand and social media promotion, the company now has thousands of social media followers and leaves a good impression.  But, were it not for the anonymous email, he would be losing more potential $9,000 clients at an unknown rate.

So, the next time an executive wants to see ROI before investing in social media, point him/her to this article.

That will make an impression!

Richard CummingsSocial Media “Impressions”: What Impression is Your Business Creating?